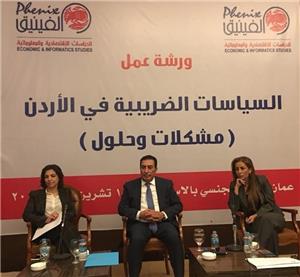 With the participation of more than 70 participants representing many economic sectors, political parties, the House of Representatives, civil society organizations, experts and interested parties, the Phenix Center for Economic and Informatics Studies held a workshop entitled “Tax Policies in Jordan: Problems and Solutions”.
Dr. Mustafa Shinikat, head of the Board of Trustees of the Center, opened the workshop by saying that “The taxation policies in Jordan suffer from many imbalances both in terms of the income tax ratio to GDP and the low number of segments on which the progressive tax is applied, At the level of tax evasion.”
The first session of the workshop included a general overview on tax policies in Jordan, in which the Speaker of the Jordanian Parliament, Eng. Atef Al Tarawneh, and Professor Jumana Ghneimat, Editor-in-Chief of Al-Ghad Newspaper, spoke.
The second session of the workshop dealt with the problems facing the Jordanian tax system which presented by the chairman of food traders Khalil Al-Haj Tawfiq, Nabil Ismael, chairman of Jordan Investors Association, economist Fahmi Al-Ketout and Dr. Zeid Rawhi Al-Kilani.
The third session of the workshop which entitled “taxation policies, a future vision”, in which Mr. Khalid Ramadan, member of the Jordanian Parliament, the Economic expert Mohammed Al-Bashir and Noha Zaida, Deputy Secretary General of the Jordanian National Committee for Women’s Affairs, spoke.
2017-11-09
Admin
Previous: Ahmad Awad – Child Labor – Roya
Next: Labor Watch: “Violence in the workplace affects women, and men are not excluded from it”