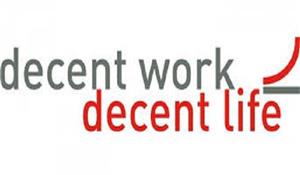 The Phenix Centre for Economic and Informatics Studies released on Saturday a report on decent work in Jordan in partnership with the Friedrich Ebert Foundation (FES) highlighting how work conditions in the Kingdom are “still weak” despite the country’s agreement on implementing decent work standards.
Jordan was the first Arab country to sign an International Labour Organisation (ILO) agreement to implement better working conditions. However, the study, released on the occasion of the World Day for Decent Work, said  the Kingdom’s labour policies were “slogans rather than deeds”, and criticised “the lack of vision among trade unions about labour and economic policies”.
Amal Abu-Jiries, programme manager at FES, told The Jordan Times that “even though the ILO agreement is there, we cannot reach decent working conditions in Jordan as long as the law itself keeps on contradicting the agreement”.
“We need to improve the law in order to enforce social protection, assuring social security and a minimum monthly salary,” she continued.
Director of the Phenix Centre Ahmad Awad said that  the main issues highlighted in the report are the low salaries and the lack of social security coverage, stating that “the government should start a social dialogue in order to evaluate the real impact of these problems”.
Regarding the low salaries, the paper stressed that this issue represents “one of the most important challenges faced by Jordanian workers”, noting how it leads to “increased poverty rates and deeper social differences”.
Furthermore, the study pointed out “the restrictions imposed on freedom of association”, noting how “the government refuses to enact legislative amendments allowing the establishment of new trade unions, despite the clear constitutional provisions”.
“Empowering workers to organise themselves is the key to effective social dialogue,” said Awad, adding that “otherwise, the government will not be able to build sustainable social stability based on decent working conditions”.
Regarding the lack of social security, the report stressed that only half of the Jordanian workforce is covered by the social security system, highlighting the number of  employees remaining in the informal market.
In this regard, Awad explained that “this happens because many of the employers are hesitant to register their workers due to the high cost that comes with it, leaving thousands of workers with no social security benefits”.
Fathallah Emrani, president of the General Trade Union of Workers in Textile, Garment and Clothing Industries, said although there are sometimes some violations, several agreements were signed in the textile sector to ensure decent work conditions in the sector.
“We have a strategy on decent working conditions and we signed agreements with all factories working in the sector to give benefits to all workers and to enhance working conditions such as annual increase, better work environment, having clinics and doctors and providing accommodation for workers,” he told The Jordan Times.
“There is no discrimination between all workers from all nationalities or between men and women. We have ten nationalities of workers in the sector and we have one unified contract or all workers in their own language,” he said, adding that all workers have social security subscriptions.
Diem Qussay, a worker in the hospitality sector, told The Jorda Times about his experience.
“The salary is so low that it is not worth to work anymore because you end up spending all the money in transportation from home to work,” he expressed, adding that “most of us [workers] don’t have a contract or social security, so we end up having no guarantees at all”.
Furthermore, the study pointed out the figures released by the Social Security Corporation last year, with 179 registered deaths of employees as a result of work accidents, in addition to 13,505 injuries.
The effects of the regional turmoil were also addressed in the report, noting the decrease in economic growth rates and rise in unemployment, which reached a 18.8 per cent in the first quarter of 2017.
Rashed Khamaisah, a university student who has been looking for a job since May, said that “it is impossible to find anything nowadays”, complaining that “the job offers are so scarce that the sole fact of getting an interview  can already be considered as an achievement”.
2017-10-10
Admin
Previous: Labour Watch issues position paper on youth challenges
Next: Jordan Labor Watch launches campaign in the International Day for Decent Work