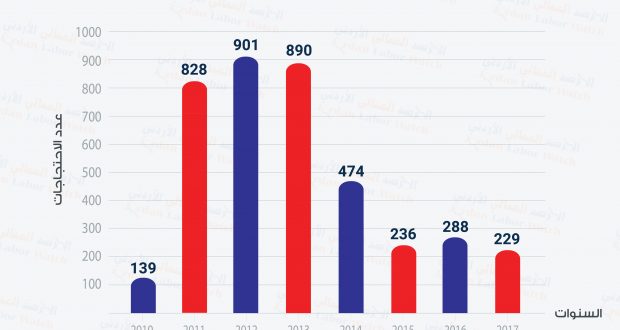 The Jordan Labour Watch (JLW) has said that the decrease in the number of labour protests staged across the country during 2017 is not an indicator of improvement in work conditions but was the result of pressure exercised by government and employers.
In a report it released on Wednesday, JLW said the country saw a decrease by 20.4 per cent in the number of protests organised in 2017 compared to the previous year.
Issued in cooperation with the Friedrich Ebert Foundation (FES), the report said that the decrease in protest numbers cannot be considered as an indicator of improvement in the working conditions in Jordan, explaining that the drop is rather linked to “a feeling of neglect experienced by most of the workers over the lack of response to their demands, in addition to the pressure exerted by many employers and various government institutions to prevent groups from carrying out labour protests”.
The study attributed the continuation of labour protests in the country to the “weak” dialogue between the government, employers and workers, as well as the “obvious” absence of trade unions and the workers’ “limited” negotiation skills.
The report indicated that 72 per cent of the protests were carried out by groups of workers without any official representation, while trade unions staged only 6.5 per cent of the protests.
Regarding the fields within which the protests were organised, the transport sector accounted for 27.1 per cent of the total demonstrations, followed by the industrial sector (19.2 per cent), the services sector (16.6 per cent), the health sector (7 per cent) and the agricultural sector (3.9 per cent).
Demands for the increase of wages and allowances, more employment opportunities, improving the benefits and incentives for workers, and objections to arbitrary dismissals were the main reasons behind the protests staged over the year 2017, according to the study.
Considering the findings, the report called for “the principles and standards of decent labour and the fundamental rights of workers to be applied to all employees in Jordan, along with a review of the wage policies in the private and public sector so that the salaries match the cost of living in the Kingdom”.
The JLW has continuously called for the Jordanian government’s compliance with the provisions of international labour standards, highlighting how work conditions in the Kingdom are “still weak” despite the country’s agreement to implement decent work conditions.
“The low salaries and the lack of social security coverage are the main issues to address,” JLW Director Ahmad Awad told The Jordan Times in a recent interview, adding that “the government should start a social dialogue in order to evaluate the real impact of these problems”.
For her part, programme manager at FES Amal Abu Jiries noted that “even though Jordan was the first Arab country to sign an International Labour Organisation (ILO) agreement, we cannot reach decent working conditions in Jordan as long as the law itself keeps on contradicting the agreement”, adding that “we need to improve the legislation in order to enforce social protection”.
In addition, the study stressed the need to amend the Labour Law, especially the provisions on the formation of trade unions, calling for “the abolition of the monopoly formed by the existing unions, which fail to follow the most basic democratic rules by preventing the renewal of their leaders”.
“All relevant rulings prevent workers from establishing unions freely, thus depriving them from their right to bargain in the event of a work dispute”, Awad said, adding that “this distorts the relations between workers and employers turning them against the interests of employees”.
The expert also noted that Article 98 of The Labour Law “doesn’t allow a group of employees to form a trade union without the permission of the tripartite formed by the government, the employers and other trade unions”, noting that “this has prevented the formation of new labour unions in the past 40 years”.
“Empowering workers to organise themselves is the key to effective social dialogue. Otherwise, the government will not be able to build sustainable social stability based on decent working conditions.”