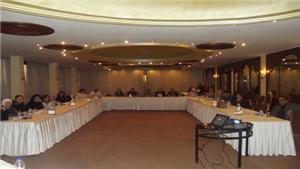 A study on the quality of elementary education in the Kingdom’s schools recommended conducting interviews with university graduates before appointing them as teachers.
The study, conducted by the Phenix Center for Economic and Informatics Studies, said that appointing teachers based on their academic degrees without interviewing them to evaluate their qualifications has negatively affected the quality of education in the country’s schools.
The low wages and lack of training for teachers, in addition to the lack of curriculum development, are also negatively affecting the quality of education, said the study, a copy of which was sent to The Jordan Times.
According to the study, despite the high rate of enrollment in elementary schools (98.1 percent) and the programs developed by the ministry to enhance basic education, there are indicators that the sector is deteriorating.
Citing international reports, the study said the Kingdom’s education ranking among world countries has dropped from 45 in 2011 to 64 in 2013, according to the Legatee Institute index.
Moreover, a study on the performance of students in reading and mathematics that was conducted by the Ministry of Education in cooperation with USAID, showed that more than 100,000 (22 percent) Jordanian students in the first three grades cannot read in English or Arabic.
The Phenix center report said that having 270 double shift schools (7.6 percent of the country’s schools) negatively affects the quality of education, adding that the drop in government spending on education, in general, is also to blame.
Figures cited in the study showed that spending on education accounted for 10 percent of the gross domestic product (GDP) between 2008 and 2010, compared with 13 percent of the GDP between 2000 and 2005.

Other reasons are related to the lack of follow-up from parents on the academic performance of their children.