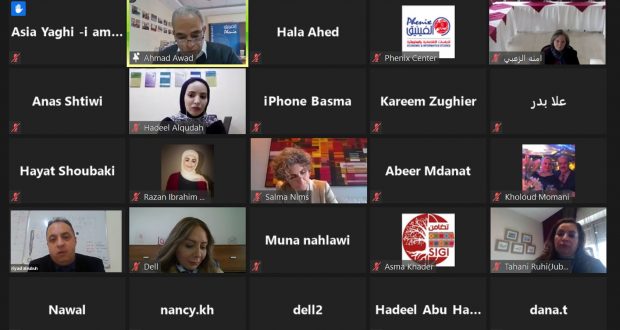 Phenix Centre for Economic and Informatics Studies held a panel discussion to discuss the economic and social rights of women in Jordan under the Convention on the Elimination of All Forms of Discrimination Against Women (CEDAW). The panel discussion, which was held remotely via the video-conferencing platform Zoom, tackled the contents of a draft shadow report examining Jordan’s compliance with its international obligation under CEDAW.

“It is evident, in a tangible manner, that the steps Jordan has taken forward towards improving the economic and social rights of women, were met with equal steps backwards, and we have been running around in vain in circles for 25 years and Jordan remains at the bottom ranking among countries in regard to women’s economic participation,” stated Ahmad Awad, the Director of Phenix Center.

Awad said that while the Jordanian Constitution calls for the protection of women’s rights, implementation and enforcement is weak as instilling real change is more time-consuming than issuing legislations.

In regard to the CEDAW recommendations of 2017 and as per Article 72 of the Labour Law, the number of crèches remains limited, which impacts women’s participation in the labour market, Awad continued, noting that the gender pay gap is still evident at 17%. He added that the convention calls for encouraging women’s work in non-traditional fields, and progress in this arena has also stagnated.

Moreover, women working in the agricultural sector do not receive any social protection, which results in poor working conditions. Phenix Center has called on Parliament to issue a by-law designated for agricultural workers as stipulated by Article 3 of the Labour Law.

Furthermore, women with disabilities continue to face discrimination and unique challenges. Although Jordan has accepted a recommendation made by the CEDAW committe that highlighted the importance of training them and providing them with job opportunities in 2017, progress in this area has been stagnating as well.

The development of the Vocational Training Corporation’s programmes did not utilize gender mainstreaming or gender-sensitive strategies. The disucssion panel noted that more women have lost their jobs than men; additionally, the imblanaced distribution of domestic and childcare duties faced by most women in Jordan makes it easier for employers to lay them off.

On women’s participation in the political scene and in professional associations, Awad said that there is steadiness in this regard, especially in association councils.

On the amendments to the Labour Law for 2020, the Director of Phenix Center summarised the issues that require review, including Article 69 that restricts women from working in certain times and professions, saying that women must have freedom of choice in this regard. He also highlighted the issues of maternity leave, which is only 70 days in the private sector while it is 90 days in the public sector, calling for increasing the days for working mothers in the private sector. The Director also called for increasing the social protection of domestic workers.

Secretary General of the Jordanian National Commission for Women’s Affairs Salma Al Nims said that the commission’s reports presented to the government were on the condition of women in the Kingdom, noting that the final draft of these reports include the government’s point of view and not that of the commission itself, according to the statement.

“There is a structural problem that prevents women from getting their rights, and we are committed to the national framework, which in turn is connected to the international commitments that encourage civil society institutions to work together in order to achieve these rights,” Nims said.