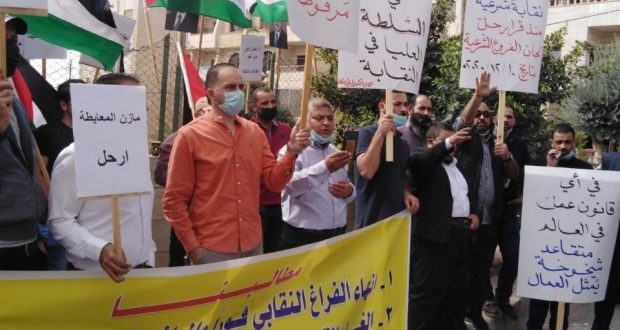 The Labor Protest Report, issued annually within Phenix Center for Economic and Informatics Studies’ Jordan Labor Watch program, indicates that this sharp increase is primarily due to the continuing decline of decent working conditions in Jordan post-COVID.

The report states that these protests express the severity of the current socio-economic crisis in Jordan, the continued stagnation of low wage levels, and the decline in the economic well-being of citizens in the aftermath of COVID-led partial and total shutdowns. The national COVID response policies have led workers to struggle to meet their basic needs and led to increased tension with employers, as the Defense Orders permitted the reduction of employees’ salaries by 30-50%.

The report, which was developed by Jordan Labor Watch with the support of the Friedrich Ebert Foundation, provided a socio-economic analysis of all the labor protests that occurred in Jordan in 2021.

The labor protests were documented through direct communication with the actors at the protests, as well as through analysis of news coverage by Jordanian media. The labor protests that were monitored and documented by the report include different forms of protest, including strikes, threatening to strike, boycotts, marches, walkouts, sit-ins, etc.

Regarding the industries in which these labor protests were implemented, teachers in the public school sector in 2021 implemented acts of protest on 58 occasions (25.8%), while private sector teachers conducted 120 acts of protest (53.8%). 29 protests were implemented by unemployed people (12.9%). Additionally, 9 labor protests represented workers in both the public and private sectors. Workers in the Palestine Refugee Relief and Operation Agency/UNRWA, have also held 9 protests (4%).

The report noted that the percentage of labor protests in the public sector has continued to decline over the past few years, reaching 44.1% in 2020 and 25.8% in 2021. The report linked this to several reasons, including the annual decline in the momentum of labor protests, and structural changes in the salaries of public sector employees, which led to an increase in the wages of workers in many institutions. This has been accompanied by an increase in the percentage of labor protests in the private sector compared to previous years, which can be explained by the continued decline in working conditions, low wages, weak social protection systems for workers, and the failure to enable all workers to exercise their right to organize and bargain collectively. The report also cited the reasons for the labor protests that the priorities of salaried workers in Jordan were focused on repealing laws that caused harm to workers. They ranked this as their primary priority within 55 protests (24.4%) out of all protests recorded in 2022, most of which were by teachers in protest against the decision to refer 120 union activists to early retirement as well as by workers in the transportation sector (including the drivers of yellow taxis, drivers of public transport buses, and drivers who work for ridesharing companies).

Regarding the demographics of people organizing and participating in the protests, it was revealed that for the first time in the past 10 years that JLW has been annually preparing the Labor Protests in Jordan Report, the percentage of protests carried out by labor groups without union dues has gone down. While 40% of all protests in 2021 were carried out by non-union-dues paying labor groups, the same number was 59.3% in 2020 and 89% in 2019. The report linked this to a number of factors, such as the restrictions imposed by the COVID-19 pandemic. In addition, many of these workers who are not dues-paying members of a recognized union are more likely to lose their jobs in light of the pandemic. Moreover, because decent work conditions have declined in many sectors, more workers have normalized poor working conditions in the aftermath of the pandemic. Nevertheless, for the eleventh consecutive year, the majority of the labor protests were carried out by labor groups that are not formally recognized by the Jordanian government and as such do not have a regulatory framework to organize. The lack of freedom for trade union movements in Jordan and weakening labor conditions in Jordan, as well as shrinking space for social dialogue and collective bargaining, have led large labor sectors to protest.

Forms of labor protest in 2021 varied in length, lasting between one day and over 25 days, as the strike carried out by the workers of the Rashidiya factory in the Jordanian Cement Manufacturing Company (Lafarge) reached its 96th day in 2021 and continued until the beginning of January 2022.

The report highlighted the need to amend the provisions of the Labor Law concerning the formation of trade unions, allowing all wage earners in Jordan to freely form their trade unions and abolish the current monopoly of trade unions. The report also called for the amendment of the current labor dispute settlement mechanisms, which have failed to create just solutions to the growing labor disputes. New mechanisms and techniques for labor dispute settlement, in line with the provisions of ILO Convention No. 98 concerning the Right to Organize and Collective Bargaining, should be developed.

2022-04-20
Salah
Previous: Experts recommend reducing the caregiving burden on women to increase their economic participation
Next: Jordan Labor Watch: The occupational health and safety structures in Jordan is full of gaps