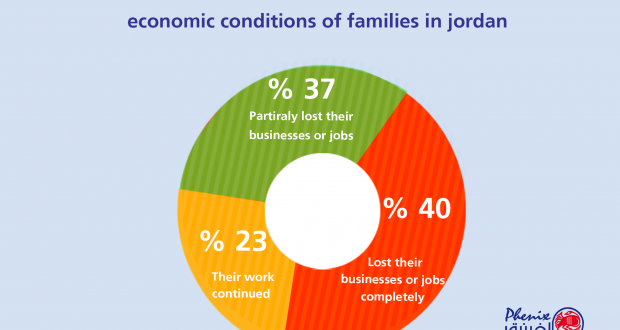 Between mid-March and mid-May 2020, 40 per cent of people in Jordan lost their businesses or jobs completely, according to a study conducted by the Phenix Center for Economics and Informatics Studies.

The study revealed that 37 per cent of respondents partially lost their businesses or jobs, while the remaining 23 per cent were not impacted. The majority of those who were not impacted work in the public sector, according to a statement by the center.

The survey, conducted online during the third week of May, measured the responses of 2,120 individuals and aimed to assess the impact of the coronavirus crisis on the economic conditions of families in Jordan.

Of respondents working in the private sector, 36 per cent indicated that their jobs have been suspended completely, while 57 per cent of business owners have completely shut down their establishments.

In regards to employees of international organisations and local and foreign civil society organisations, 48 per cent did not lose their jobs while 39 per cent had their jobs suspended partially, the statement said, noting that “this is far better than the condition of workers in the private sector and those who own businesses”.

However, women were more affected by job suspensions, as 41 per cent said that their jobs were partially impacted, compared with just 36 per cent of male respondents.

Of the total respondents, 41 per cent said a that family member lost their job due to the crisis, which the statement said “indicates how far the labour market has been impacted during the first two months, with expectations that the number of those who lost their jobs will increase as the year progresses”.

The survey was conducted following two full months of work suspension, with a sample of 76 per cent males and 24 per cent females from around the Kingdom.

2020-06-02
Salah
Previous: Consequences of the Coronavirus pandemic on Jordanian families
Next: Survey Study: Impact of the COVID-19 crisis on the economic conditions of families in Jordan